Imagine yourself taking a shower with lights off, and the showerhead over you is illuminated with LED lights while pouring water over your body. It sounds relaxing, right?

You may get this sensation whenever you want with the correct LED showerhead. You might also search for a shower head that changes colors depending on the temperature of the water.

While you can get numerous LED showerheads for your bathroom, not all of them are manufactured alike. Some are fantastic, while others are a letdown.

I will present to you the best options to pick from according to your taste. Let’s discuss the best LED Rain Shower Heads in detail. 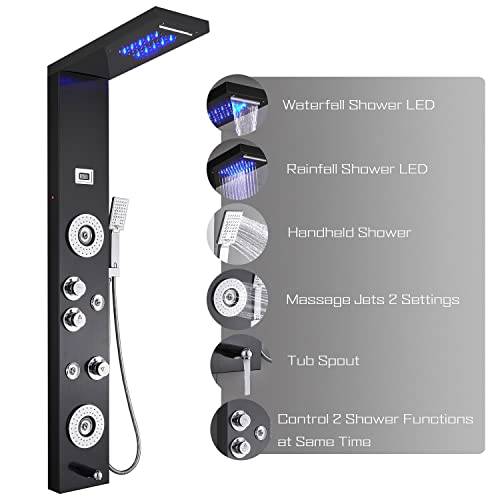 ELLO&ALLO LED Shower Head is a beautiful showerhead that will quickly change the aesthetic of your shower.

But it’s much more than a pretty appearance; it’s an interactive shower unit having nozzles and showerheads that spray you from all directions.

A rain-style drenching is provided by the LED-illuminated above showerhead, while multiple body-height jets spray you horizontally.

The connection type to the shower system water line is half-inch FIP.

It is equipped with switches with several outlets that control many configurations of water effects.

If desired, the shower panel allows you to turn on two settings simultaneously. Water pressure is actually the secret.

The waterway comprises a copper showering faucet and a PVC water hose.

It has a two-year limited parts warranty from the date of payment. The warranty becomes invalid if the product was obtained via an unlicensed distributor. 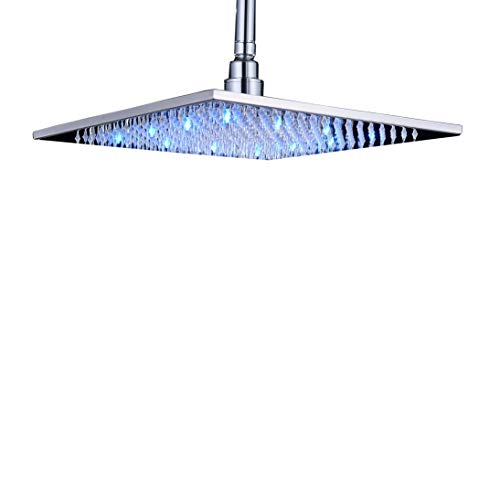 This showerhead, unlike many of its counterparts, is constructed of brass, which makes it rather heavy but also gives it a higher-quality feel.

The Rozin LED showerhead only glows blue, unlike the majority of the shower heads we reviewed for this list, which featured multi-colored LEDs that delivered three to seven distinct hues.

This isn’t a deal-breaker, though, and it can even be preferable in certain cases.

It does not require batteries to operate because it is powered by water pressure.

It must be mounted to the ceiling because it is an overhead shower that needs to be installed on the ceiling.

It has a size of 12-inch by 12-inch, which makes it one of the largest overhead showerheads on our list.

It comes with a half-inch standard connection, including a ball joint and rubber gasket.

It has an all-metal construction, which contributes to its heavy weight. 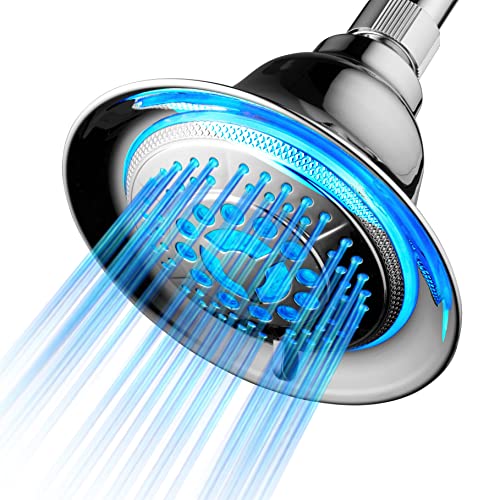 The DreamSpa All Chrome LED Shower Head’s LED lights are meant to indicate the water temperature by changing the color of the light.

It’s warm enough to burn when the light flashes red. When the light appears blue, you can assume it’s cooler than you’d want.

This is an excellent feature for kids to prevent them from burning themselves. You should opt for it if you have kids in your house.

This showerhead has an extra-large chrome face that has a reflective perimeter rim. You might choose it for the aesthetic look that it gives.

No batteries are required since LED lights in this showerhead are powered by flowing water.

There are five settings available on this showerhead. You can select any one mode according to your requirement and enjoy your shower.

The color of the LED lights varies with the temperature of the water. It contains a three-color water temperature sensor that changes colors.

It offers installation without the need for any tools. No equipment is needed to attach to any conventional overhead shower arm in seconds. 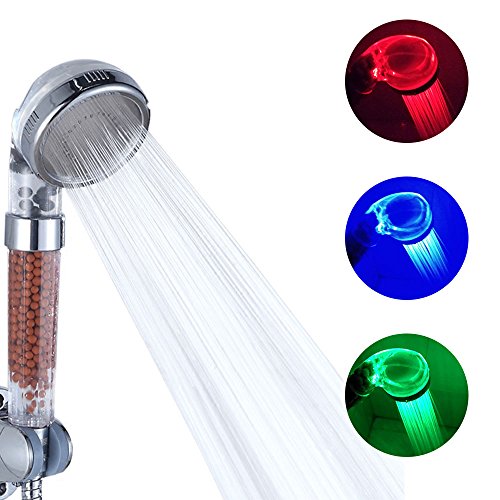 DELIPOP’s LED shower head is extremely inexpensive, and it appears to be such. The LEDs are extremely bright, and their hue varies in response to the temperature of the water.

The LED handheld showerhead has a temperature sensor built in to let you know how hot the water is.

No batteries are needed to power it. The changing color LED of the showerhead is powered by running water, which saves electricity and protects the environment.

The showerhead is made using high-quality corrosion-resistant material and will stay with you for years to come.

The showerhead is easy to install and comes with a 20 mm universal plug. You are all set to install this showerhead without the help of a plumber.

You should not be worried when the kids take a bath. The showerhead is intended for easy handheld use to prevent burning.

Buying guide for a Bluetooth Showerhead

As you have gone through some of the best LED Rain Shower heads, you might want to search by yourself.

The problem is, how can you know which is the best option for you? We’ve put up a quick buyer’s guide to help address this issue.

It will go through the qualities we believe are most important to consider when purchasing a new LED showerhead.

Considering the fact that you are buying an LED showerhead to enhance the aesthetic of your bathroom, the quality of the showerhead, as well as the LED, must be your top priority.

Showerheads with LED lights come in a variety of forms these days, so you’re not restricted to just one.

Please remember that not all showerheads are compatible with all shower configurations.

The ability to see a visual depiction of the water temperature is one of the most appealing features of these newest showerheads.

Some of these gadgets have temperature readouts integrated, which will display the precise temperature of the shower water.

However, many of them choose to employ LEDs as a simple approach to indicate the water temperature.

Just because the showerhead you are opting for includes LEDs doesn’t rule out the possibility of other functionalities.

Today’s showerheads come with a variety of spray patterns to pick from.

If you want the flexibility of having several water streams from the same nozzle, you should search for one that has numerous options.

LED Rain showerheads come in a variety of pricing ranges. A basic LED showerhead would set you back around $30.

Based on the design and kind of showerhead, the price might range from $30 to $1000. The more functions a showerhead has, the more expensive it will be.

What is an LED showerhead?

An LED showerhead is basically a showerhead in which LED lights are incorporated to either enhance the aesthetic of your bathroom, indicate water temperature, or do both.

How safe are LED showerheads?

LED showerheads are also completely safe, even if they are installed wrongly because they do not consume electricity.

How do LED rain showerheads work?

The LED lights in every LED shower head are powered by the flow of water.

The water flow powers a turbine or generator inside showerheads, which generates energy that charges the showerhead’s LED lights.

The rain shower head is usually used to enjoy baths like rain spray. In simple words, you can enjoy a rain-like experience while taking a bath with this gadget. Sometimes the rain shower may face a lot of errors that indirectly affect its working.

So below I am going to mention the errors of the shower heads along with the reasons. So stay with me to know about these common problems.

Low Flow in The Shower Head

Another common problem observed in these types of shower heads is that their light may get fuse while using them for a longer duration. The bulbs in the shower head are usually used as a decorative piece.

The most common reason for this problem is the overuse of LED rain showers. Let me clarify that LED bulb has a specific life span. After that time you have to replace them.

There is no solution to restore the LED lights. when These lights fuse you have to replace them with new LED lights.

In this article, the best LED Rain Shower heads have been discussed in detail, along with their pros and cons.

I hope that by the conclusion of this article, you have made up your mind about buying one of the LED Rain Showerheads to enhance the aesthetics of your bathroom.

I will personally recommend “DreamSpa All Chrome LED Shower Head” for its amazing features like the absence of batteries, five different settings, and easy installation.

The best feature of this showerhead is the LED changing colors with the change in water temperature that will come in handy for kids.